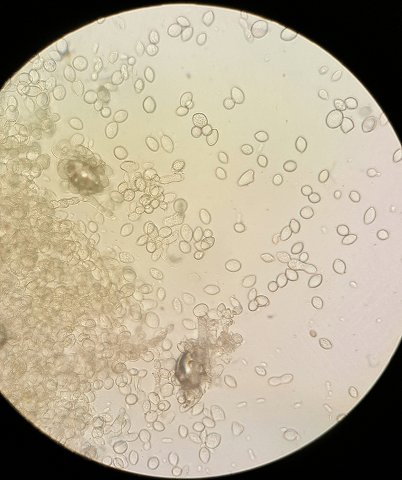 1. One of the main drivers of your stone fruit spray program is brown rot. Even though I hear blossom blight stage of brown rot has never been that dominant of a problem in Virginia, there is always a risk from it if spring is abnormally rainy. The key stage to start brown rot blossom blight protection is when flower buds start to turn pink in color. Monilinia inoculum (Figure above shows Monilinia spores) is surely overwintering well on rotten fruit on the orchard floor and in thin branches on the tree so you should count that infection pressure is high. Even though we mostly worry to keep the stone fruit clean from brown rot, the early spring sprays determine the success in late season fruit protection, so we might as well do a good job now in brown rot control. The key factor to keep in mind are weather conditions: will it be dry or wet spring? Dry springs are not conducive for diseases in stone fruit trees. However, later spring showers can quickly change this, so use your most efficacious single-site fungicides as soon as rain showers start.

At pink or white bud I would recommend to start using chlorothalonil (Bravo, Echo, Equus), in orchards where brown rot was not that big of an issue last year. If it is dry and no rains occur from white bud to shuck split, fungicide applications might not be needed at all. On the contrary, if you had high pressure brown rot last year and rain is predicted it is better to start with Indar, Elite, Tilt, Rally, Rovral, Inspire Super or Merivon (Rally, Indar and Inspire Super will also control rusty spot). The following applications should be chlorothalonil until shuck split has completed (stop using this active material at schuck split), but if heavy rains continue maybe a better option will be to use iprodione (Rovral), which is allowed for use until petal fall in apricots, cherries, peaches, nectarines, plums and prunes. You can alternate iprodione with cyprodinil (Vangard 5 oz/A) at pink and bloom on apricots, tart cherries, peaches, and plums, but do not use this AP fungicide after bloom and do not use it on sweet cherries. Scala can be used instead of Vangard on all stone fruit except cherries, and can be applied after bloom and in pre-harvest period but limit your use to 3 applications per season (Scala is labeled on apricots, peaches, and plums). You can also use Topsin M plus captan or sulfur.

Since we do not know the status of fungicide resistance in Monilinia spp. in Virginia, during mid-summer and getting closer to pre-harvest period, you should tank mix with other fungicides (e.g. Topsin M, captan or sulfur), and alternate standalone AP fungicides (Scala), with strobilurins (Gem, Pristine), group 17 fungicides (Elevate), SDHI-s (Fontelis), DMI-s (Rally, Indar, Tilt) or premixes (Pristine, Merivon) to maximize the yearly number of allowed applications per year of these fungicides, and not exceed them (e.g. Tilt should not be used more than 2 times in preharvest period). This will help avoid resistance development in brown rot fungi. The key period when fruit are susceptible to diseases and to deliver the most effective fungicides is from petal fall to pit hardening. Gaps in protection during this time will allow for latent infections that will be revealed much later when fruit get closer to ripening. Gem, Inspire Super, Indar and Topsin M plus captan or sulfur will also control peach scab well but not Rally. Always read the label to determine all limitations in use of these fungicides.

In some parts of Virginia, brown rot fungus was found to be resistant to the benzimidazole fungicide Topsin M. Thus use Topsin M in combination with other (non-benzimidazole) fungicides. If you experience failure in control there might be fungicide resistance issue and these events of loss in efficacy express in times of high infection pressure fueled by excessive rains and cold weather. If efficacy failures occur, change tactics to apply the highest rates on the fungicide label to achieve complete Monilinia population kill and secure good canopy coverage (spraying on days with winds 8 mph or more is not going to secure good coverage). In such orchards, do not use alternate-row spraying.

If black knot has been a concern in tart cherries and plums, you have to protect the twigs from infections while they are actively growing and green. During dormant pruning, it is essential to remove the black knots on branches as they are source of infection. Cut branches 8 inches below each knot to remove them. Ascopsores are disseminated starting at bud break and lasting until the terminal shoot growth completes. The key time for infections is when young leaves are developing at the time of white bud and shuck split. In a dry spring that is less favorable, spores can have extended period of release through June. The fungus infects quickly after only a very few hours of wetting with temperatures above 55ºF, and more hours of leaf wetting are needed to infect if it is colder. Besides removing black knots by pruning you should remove any nearby host trees like wild black cherry and Japanese plum that can be source of infection. Removed black knots must be burned or buried. If black knot was a problem in your orchard, fungicide schedule of chlorothalonil (Bravo, Echo, Equus) should start at bud burst. Captan or Topsin M, which are only registered in cherries for controlling brown rot blossom blight can also be effective for black knot, and captan with Bravo is a good tank mix for both diseases. The best spray interval is 7 to 14 days, applying before rain, until terminal growth stops. In orchards with low pressure, spray schedule can be started at white bud. Stop applying chlorothalonil at shuck split.

2. RIMpro online cluster of models developed in Europe has brown rot prediction model which can help you decide when to apply your fungicides (Fig. 1). You can find out more information on subscription on:

Subscription for one individual grower is $230 and allows you access to all apple, stone fruit, and grape disease models but it also includes some insect pest occurrence prediction models (please contact me at acimovic@vt.edu and I can guide you through this process): 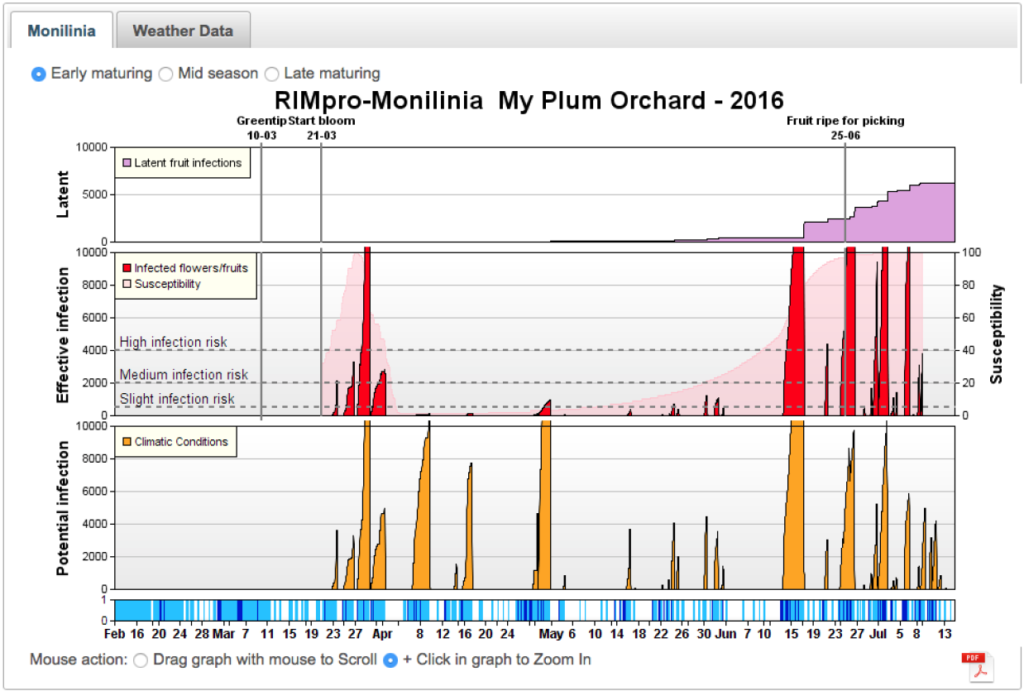 Figure 1. Output from Brown Rot prediction model by RIMpro. Weather conditions frequently allow for infection (lower graph), but the real infection risk strongly depends on the inoculum, growth stage (flowering, ripening fruits), and wounding (e.g. hail, insects). Growth stages of many varieties of cherries, plums, nectarines apricots varies, and thus their susceptibility in time also varies. The user must set the estimated local date for flowering and harvest to allow the model to produce accurate predictions. The situation for ‘early’, ‘mid-season’ and ‘late’ varieties (left top corner of the Figure 1 above) is calculated and presented in parallel on the model output. In the example shown the early stone fruit varieties in this orchard are hit by severe infections during bloom resulting in ‘brown rot blossom blight. The following infection events during April and May did not result in infected fruit as the fruit are not yet susceptible (April 5 – June 10). During June, when the fruit are maturing and susceptibility increases, a series of severe infections occurred just before and during harvest. These infections will result in an increase of latent infections that will manifest in the grocery store (Used by Permission of RIMpro B.V., Source:  RIMpro® Cloud Service, The essential tool for sustainable crop protection, General information on RIMpro® cloud platform – 9th December 2020).