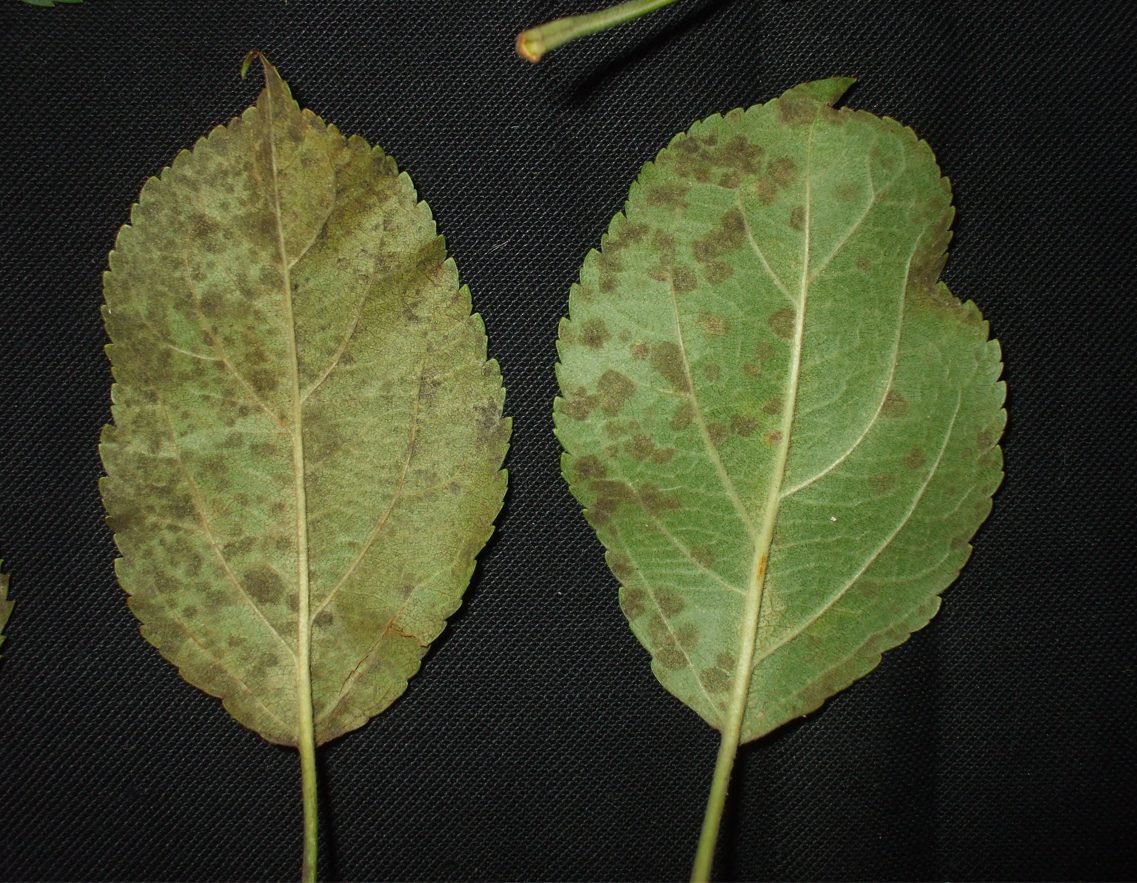 If apple scab was not controlled timely last year and primary and secondary infections on leaves were visible at any time during the season, you should aim to reduce overwintering scab inoculum residing in leaf litter on the orchard floor. Especially conducive for apple scab fungus overwintering are numerous late summer and fall infections visible as small lesions on the underside of the leaves (Figure 1).

These fall scab lesions are the most productive places where apple scab fungus will grow into the tissue of leaves after they reach the orchard floor and form initials of pear-like fruiting bodies of the fungus called pseudothecia (Figure 2). The pseudothecia facilitate release of apple scab ascospores in the spring with each wetting event.

Pseudothecia are harbored in dead leaves and release ascospores (Figure 2, 3) that cause first infections on green apple bud tissues in the spring (leaves, fruit and petioles of both leaves and fruit). If you had a high disease pressure last year, you should aim to reduce inoculum size in leaf litter (fall, spring, or both in spring and fall). The key goal of this practice is to allow faster degradation of leaf litter by microorganisms and worms on and in the soil. Anytime during apple dormancy, when there is no snow cover and it is not muddy, use the flail mower to shred leaves to smaller pieces – that will help fasten the degradation by these organisms. In smaller orchards, rake leaves from under the trees into row middles and remove leaf piles with flail mower mode for scalping the sod (Cox, 2016). Most used option is to spray apple leaves with urea just 1 to 2 days before the major leaf drop in fall (first severe frost) or as leaf litter on the orchard floor – when leaves are on the branches you will have better coverage with urea. Use rate of 40 lbs of urea / A in 100 gals of water. However, make sure this practice is done late enough in fall and start of cold weather to safely avoid promoting any late growth with the deposited nitrogen. If you aim to spray leaf litter on the ground, best timing to do this is late winter but before bud break. Turn air deflectors downward and/or turn off top nozzles to allow spray mist to lift the loose leaves on the orchard floor and coat them with urea as much as possible. Always wash and rinse well your spray equipment since urea can wear up any rubber parts, washers, and gaskets in the sprayer, especially the sprayer pump diaphragm.

Instead of urea, and many times this is the only option in organic orchards, lime can be used at a rate of 2.5 tons / A (Spotts et al. 1997). If lime is used, it is better to use it after leaf drop in fall or early in the winter. Lime increases pH or basicity (opposite to acidity) promoting microbial activity and litter breakdown. Use powdered lime form dispersed by lime spreader/s as the most efficacious way of applying it: https://www.google.com/search?client=firefox-b-1-d&q=lime+spreader. Reduction of ascospore inoculum dose with these methods can range from 50-70% (MacHardy et al. 2001; Sutton et al. 2000).

Reduction of scab inoculum in the above described ways does not mean you do not need to spray against apple scab next spring. Enough inoculum will always be present in the orchard to cause infections if gaps in fungicide protection are allowed. Inoculum reduction actually secures better efficacy of your fungicide sprays and reduces overall chance for severe scab infections.

This new disease in Eastern apple production regions caused defoliation and fruit spots from 2017 (Figure 4). A lot of growers in both 2017 and 2018 complained about their trees of defoliated between 20 – 70% from September to October. Early fall loss of canopy could overly expose fruit to sun and may lead to sunburn, but my primary concern are infections of fruit that can happen on fruit with significantly defoliated trees and can carry over into storage. Over many years of defoliation, apple trees can get fewer buds set and weaken due to premature loss of leaf mass to this disease This reduces accumulation of starch reserves in the trunk and scaffolds and can push more green growth late in the fall when they trees be preparing for winter dormancy. The primary host for M. coronaria is apple (Malus pumila) but other species such as Malus baccata and Chaenomeles spp. are also known to host in this fungus and serve as inoculum sources.

Fungus Diplocarpon coronariae which causes Marssonina Leaf and Fruit Blotch overwinters in fallen leaves on the orchard floor (EPPO 2013). Ascospores originating from overwintered fallen leaves cause first infections in spring. They canform in the overwintered cup-like fungal structures called apothecia that form on the leaf litter from last year but it is not known whether apothecia and Marssonina ascospores can form in conditions of Virginia. It has been reported that in Korea apothecia do not form and that the fungus overwinters as asexual spores (conidia) on fallen leaves (Back and Jung 2014). It is highly likely that this is also happening in Virginia. Nevertheless, ascospores still might form and could serve as inoculum for primary infections, while the conidia are asexual spores produced in plate-like bodies on the leaf surface called acervuli (black dots inside the brown blotches which can be seen with a naked eye or a magnifying glass). In the case that ascopores do not form, conidia infect leaves first in mid- to late-spring (Figure 5). Acervuli are spore groups visible as small black round specks after leaf epidermis is ruptured by pushing the spore masses out. Conidia can also cause several secondary infections during the season. RIMpro: https://rimpro.eu/ offers a disease prediction model that allows to predict when will the first infection of the season occur based on weather forecast and will indicate to you when to start your first spray before the first infection is announced. It seems that in Europe and probably in Eastern US, infections start sometime late in May or the first week of June. Typical symptoms are usually visible 40 – 45 days after the infection (Lee et al. 2011). In the orchard, spores disseminate by rain and wind. Trade with nursery material that carry infected leaves allows introduction of tis disease into new regions.